Netflix got in touch with me directly, saying they were looking for six artists to reinterpret iconic scenes from their show Stranger Things.

It was, of course, a wonderful surprise to get approached by them, they are such a renowned company, and also, I’m a huge fan of the show.

It was particularly exciting as I would be dealing directly with the client and their board. We scheduled a meeting soon after, and they explained their goals.

“Through the innovative use of animation, they hoped to generate buzz around the upcoming season as well as refresh their audience of previous favourite moments and characters.”

Animation gives an infinity of options in terms of the imaginative aspect, and they wanted each artist to use their personal style and creativity to enhance the visuals. 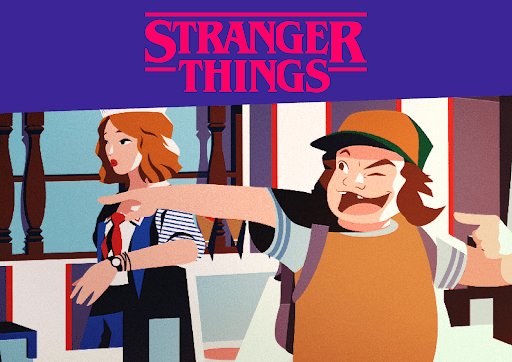 They gave me a list of scenes to choose from, but we also had a fair amount of freedom to expand the selection if needed. I immediately picked the memorable handshake reunion scene between Dustin (Gaten Matarazzo) and Steve (Joe Keery) in the ice cream shop in S3.

The friendship, palettes, and energy of the scene would give me a lot to play with. The store is also where we are introduced to Robin’s character (Maya Hawke), making for a great dynamic trio who were definitely my favourite characters in the show.

Netflix was keen on having each artist’s personal impressions of the scene, and I knew it would be a challenge to recreate all three characters in a new style unique to my aesthetic while also keeping the actors’ likenesses. I couldn’t wait to start working and experimenting in ways that only animation would allow. I sketched some initial concepts and presented a rough storyboard in my pitch deck, proposing the idea that the handshake between Dustin and Steve unlocks another dimension. The background and elements in their characters would mutate to a much darker upside-down as the two friends laugh and perform the lightsaber fight. Robin’s final comment brings them back to reality, finalising the sequence.

Once Netflix gave me the green light on my pitch, I started working towards getting a team together. I first got Eva-Marie Kung on the production side to help me get in touch with the artists and aid in communication and budgeting. She comes from a more cinematic background but had already assisted with notable brands such as Disney, so I knew she would be a perfect fit. I had worked with Shashi Shekhar and Eric Dias on various other projects, so it was a no-brainer to get them on board for this straight away. Then there were a few new creatives I admired and was keen to work with, such as Melissa Farina.

The first step was designing: we needed someone with excellent character style but also with an ability to adapt and take on the direction (and my quite specific style), which is where we found Brad Koo. Brad was a wonderful new addition and provided the character base for the other animators to work on later.

The entire team was spread out around the globe, which can complicate communication at times. I’m very hands-on as a director. I couldn’t always wait for the time zones to align to make tweaks, so I often did them on my side as they came up. At times, this backfired, resulting in spending extra time aligning each other’s work to avoid working on the same corrections, which was a good lesson for me to remember in the future. When creating a new combination of artists, there’s always an initial concern about whether they manage to connect on a visual and stylistic level. I was delighted to see that, in this case, everyone was attuned to each other, and all proved excellent, efficient team players.

Netflix wanted us to bring our own styles, and my aesthetic consists mostly of hard shadows, highlights, and solid colours. My animation is often character-based.

I created two very strong colour palettes: one for the beginning of the film, the normal world, and one for the upside-down. They needed to work together without expending too much on the number of colours since once I lock on a palette, I only take from those selected colours throughout. 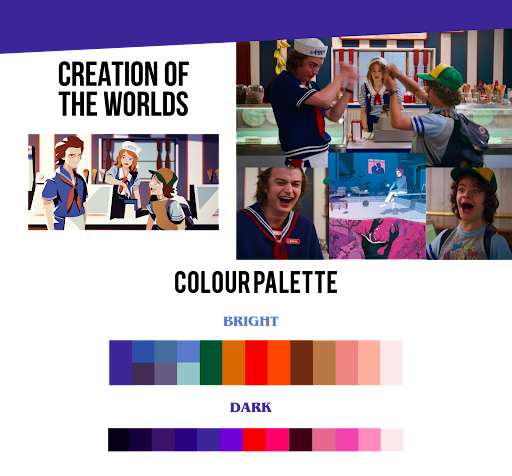 In my experience, this approach with colours has always proven to be effective, especially during clean-ups and working with vectors. Once I explored the options and found a collection of colours I was satisfied with, I brought Brad in to help me with the designs. Brad is an incredible artist with a particular visual sensitivity which I knew could bring a softness to the characters. 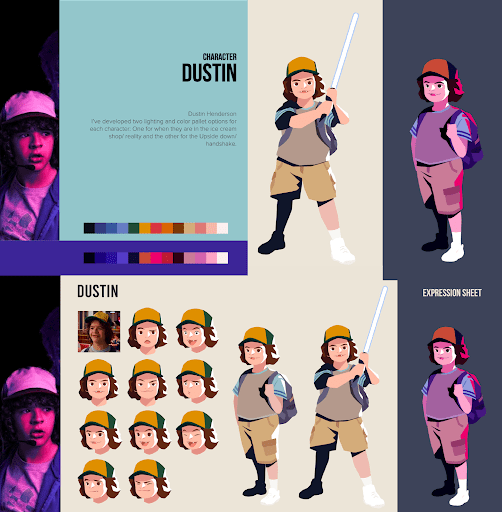 The challenge was merging his multi-layered gradients and pixel illustration style with my minimalist vector palette approach. It took us some time to find the perfect combination of elements, sometimes in an almost 24hr approach between us, simply due to the time difference in our countries. It was so rewarding to get the extra details of his artistic eye and slowly transform the whole into the solid colours I needed to complete my vision. 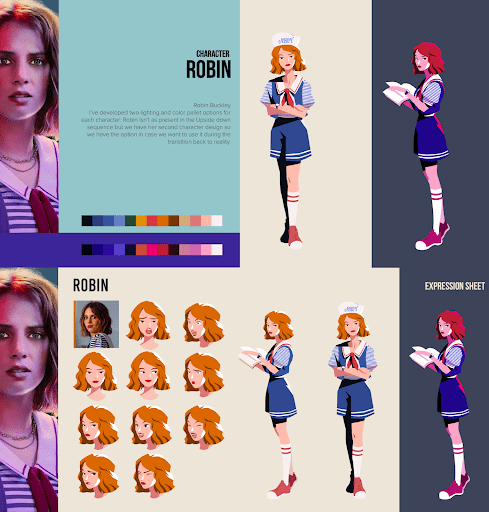 Once the characters were complete, it was time to move on to perfecting the storyboard and perspectives and integrating the new designs. We had a blueprint of what needed to be done shot-wise, but the idea was to extrapolate all those limits from the live-action sequences into the much grander freedom that animation provides as a medium.

I found myself remembering the scene in Space-Jam when Bugs Bunny explains to Michael Jordan the stretching and exaggeration. I was curious how we could use those artistic principles in this without distorting the similarity to the real-life actors. I started honing the storyboard repeatedly until it all fit. 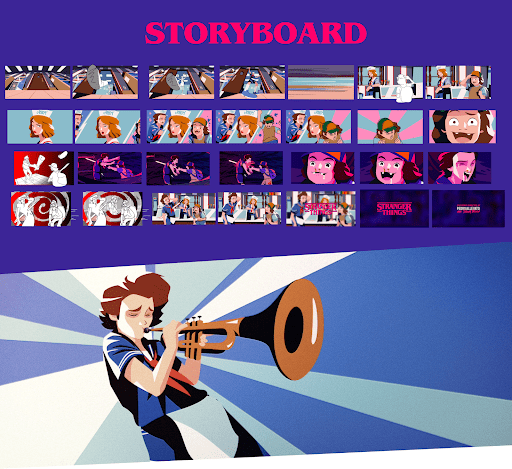 The storyboard/layouts came out extremely precise and were now ready to be brought to life – who better than Melissa and Shashi to do that kind of work? They both had the awareness of how to give it the life I was looking for. I initially spotted Melissa, in fact, due to her excellent understanding of that classic cartoon feel I wanted. Eric is one of the fastest animators I know, and his clean-up (mostly done in AE, believe it or not) made the process unbelievably efficient and time-effective. This allowed the four of us to really explore different animations and expand on the concept.

We finally submitted to Netflix, hoping they would be as happy with the end product as we were but prepared to make any amendments they might want.

My original animation had more blood coming out of Steve’s nose because he gets beaten up multiple times in the show. We also had drool on Dustin’s mouth to really heighten the difference in the upside-down and play with that contrast. 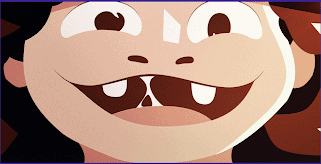 Netflix wasn’t crazy about those details, so we happily removed them. They also gave us access to the show’s entire sound and music library, which was incredible. This allowed Bruno Allevato, my sound designer, to have free rein to play, adding layers of sounds and effects that aligned with the show’s previous style and mixing it all into something impactful and new. He enhanced the Looney Tunes cartoon style in the process with a touch of comedy needed to fully complete the animation.