Tom Ludlow, a Motion Designer, studio founder, former farm boy, and Colorado native, created an Instagram account as @Denver_Donkey in 2012, a nod to his love for the Denver Broncos.

In 2021, he began creating and listing NFTs under the same moniker. In April 2022, his wife, Lindsay Ludlow – fondly referred to as Mrs Donk – detailed his journey into the metaverse in the  Motonographer article: Non-Fungible Husband.

Now, the Donks are back with a series of interviews showcasing people, projects and opportunities within the NFT and Motion Design space. 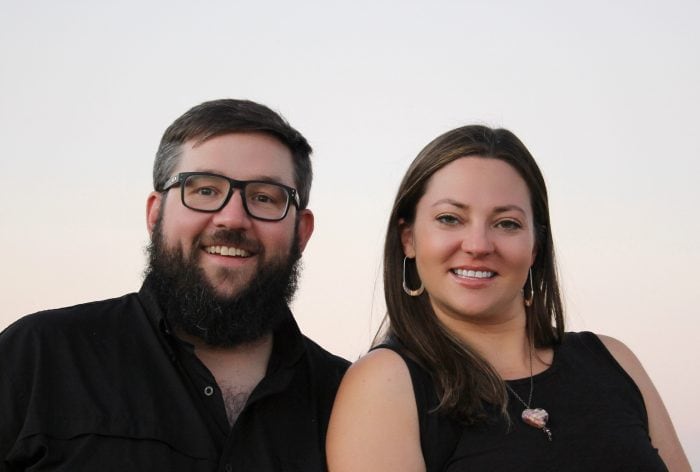 This week, the Donks sit down with Alex Delia…

Alex Delia fell in love with animation as a child with his face pressed up against his TV set, mesmerized by the morphing, popping pixels. He later learned to animate and received a BFA in Film and TV production. But he never considered himself a “real” Motion Designer as he never landed a full-time job in the field. 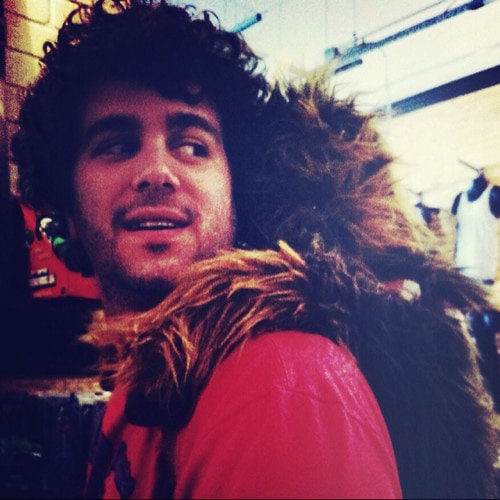 Delia’s perspective shifted when he decided to think of himself as his own client. He produced animations he loved and started minting his “psychedelic” motion designs into NFTs.

After about six or seven months, I started getting sales. Then I got a pretty big sale, and I was like, okay, think I could probably leave my job.

Now a full-time crypto-artist, Delia told us he first heard about NFTs from KidMoGraph in late 2020.

I knew this had something to do with digital preservation or digital ownership because I knew right away that was the ethos of cryptocurrency. Everything’s trackable; everything’s on a big spreadsheet called the blockchain. I figured, whoa, this guy can sell animation that he made by himself. He wasn’t contracted to do it. He has that Tumblr blog that’s super awesome, and he’s just making cool shit, and people are buying one-of-ones.

Then, Beeple got into it, and it became ‘mini-mainstream’. And that’s when I was like, okay, I should probably start doing that.

Delia used the concept of utility in creating his NFT collection, Artifact Quest, which he describes as a ‘science fiction, fantasy horror collectible game’.

I say game, but really, it’s art. It’s an ongoing collection. There is no cap number of Artifacts. Pretty much every Artifact has utility within this inner narrative of Artifact Quest, which mostly exists in Discord with the different collectors. The collectors influence a lot of what happens in the story. 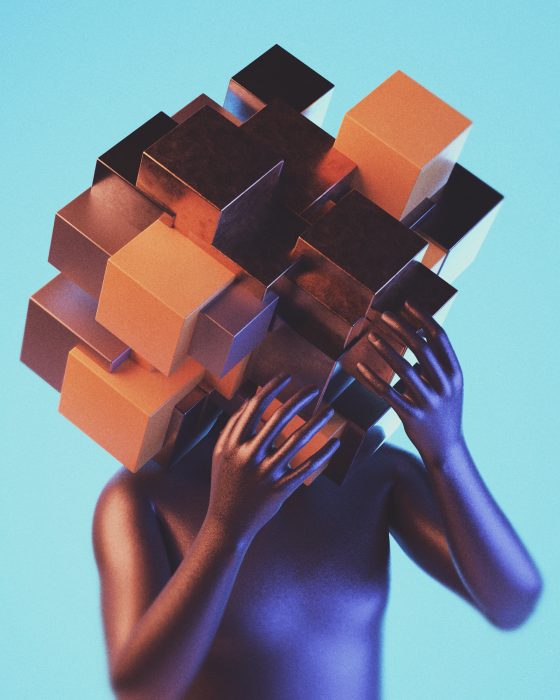 The Artifacts are really simple designs of 3D cube clusters, and the cubes are different colors. They rotate 360 degrees in 12 seconds, one frame per degree, 360 frames. Now we have this studio where anything you drop in will rotate the same amount, and then you can change the floor, put it in a different studio, and put clouds in it. Then you start to say, well, what kind of story am I telling with this artifact? And we dig into that as it goes further. We’re in Season Three right now.

It’s kind of like a video game collectible. But it’s also part text adventure as well because you’re making things happen by participating in the Discord. And that also influences what I make as well. I get ideas from collectors that I never had.

Yeah. And I remember when MVD blew up the earth, I was like, ‘oh my god, Lindsay, the earth just blew up in Artifact Quest!’ She was like, ‘you’re such a fucking nerd.’ And I was like, ‘No, no, no, no. This is being driven by the creator, as well as the community and the collection. Everyone’s feeding this narrative.’

It was cool to meet MVD at Ethereum Denver. That blew my mind!”

There’s a lot of Artifacts out there. There’s thousands right now. So I’m trying to call them back. So a lot of new mints are going to require burning your Artifacts to use them as a currency. That was always planned because there needs to be some kind of mechanism to scale it back while still moving the story forward. My background is in filmmaking, and narrative has always been super important to me.

So, why did you choose to mint Artifact Quest on the Tezos blockchain rather than Ethereum?

It’s cheaper. There’s no real gas fees, and it’s something you can be multi-efficient with. Because of that, Artifact Quest has spread far and wide. Some of them have like a hundred additions and cost 30 cents. So a lot of people buy multiples, they trade them with other people. They hold on to them; they sell them on secondary. There’s just a lot of movement and activity on Tezos.

If you want to make a lot of something that has a lot of activity and transactions, Tezos is great. I still believe that Tezos is going to be a fucking banger one day and be worth a ton of money. It’s the greatest blockchain for NFTs, I think.

In addition to Artifact Quest, Delia has many other NFT collections. Factoids are ‘sexy 3D mutants with Artifacts for heads’. His 99 Brains collection, listed for sale on the Ethereum blockchain, was his very first collection, featuring 3D modeled brains rendered in gems and materials, which didn’t really move at all at first, then totally sold out mysteriously one night, many months after release. 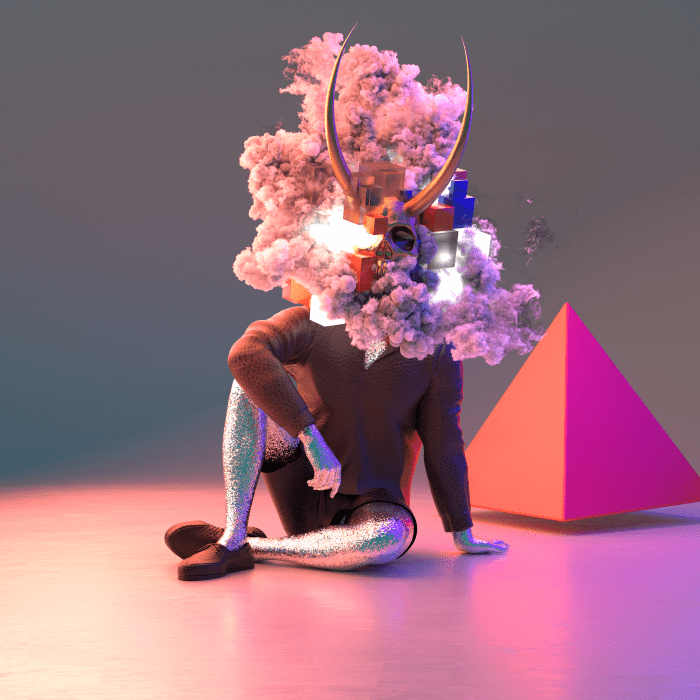 Delia told us that his most pivotal sale was of his one-of-one, Sweet Map, a static 3D piece that sat for sale on Rarible for months with no interest. Then, Delia decided to burn Sweet Map on ETH and move it to Tezos, where he had a larger following due to Artifact Quest. He listed it for what he describes as an ‘absurd price’ of 2,000 Tez, inspired by a huge sale on Tezos by KidEight. One of Delia’s top collectors purchased Sweet Map for the full listing price, a ‘transformative moment’ in his career, inspiring him to make the leap into full-time NFT creation.

One of the first things I did once I got enough money from NFTs was I bought a PC and a legit subscription to Cinema4D and Redshift. I was like, all right, great. Now, I’m legit. Now, I’m a Motion Designer!

My goal is to have enough work to where I could have a whole exhibit of the stuff I’ve made, just filling up that room with my art. It’s never really been about the recognition or the money.

I feel connected to Tom (Denver Donkey), he is just such a great presence, and he really reminds us that we’re here not to make a ton of money, which it’s great if we do. But we’re really here to just show off what we’re interested in. The fun of creativity and hanging out with other people doing this [is reason enough].

Speaking of fun, what’s the most exciting thing to happen to you as an NFT artist?

I was at the pool with my wife after I had just listed this piece called the Aquaburn Brick, a glass brick that rotates. I check my activity, and I see FVCKRENDER bought this piece. And I was like; there’s no way that’s really him. So I go to the profile and see that he’s got work listed for 20,000 Tez or something. And I was like, holy shit, man, FVCKRENDER just bought this!

So I tweeted about it, and I DMed him, and we had a little back and forth, and it was cool. Only in NFTs could someone who’s looked at somebody from afar for this long have this one-on-one connection that happens in an instant like that. It was one thing that told me, okay, I’m really onto something here.

I always found there’s a lot of beauty with art in the accident, and that’s why I love filmmaking because it’s just a series of compromises. You make do with what you have, but you also learn to appreciate what you’ve got, flaws and all. And I look at AI art a lot like that.

He began using the Wombo app to create a series called Sorceress, based around a character that fits within his Artifact Quest universe. But he quickly leveled up.

Wombo was the great gateway drug that got me to Midjourney, which is real magic.

The real skill with AI art is trying to make it not look like AI. Creating art with generative apps could be considered ‘cheating.’ But it’s really a conversation with the biggest brain you’ve ever met, that’s seen everything, that knows every reference. You’re asking it to interpret something, but it doesn’t have great motor skills. It doesn’t draw it perfectly, but you see a glimmer of something, and you go, ‘okay, do more stuff like that.’ 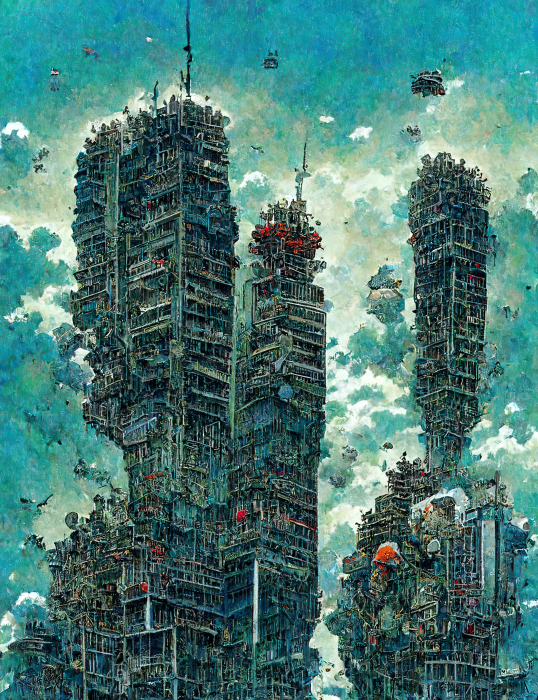 His newest project, currently named Red Pelican Society, influenced by the ophanim angel, manga, and Moebius, pushes the boundaries of AI, creating ancient-looking imagery that seems (to us!) completely human-generated.

It looks like a human actually did it, but it’s got this interesting intricacy that only the craziest humans could come up with. You can create intricacy so fast, and it looks good, but you still have to have taste. You still have to be a human. You have to chase what looks good.

Why do you feel you’ve been successful in the NFT space?

I’ve learned to play to my strengths. There are no rules here. So just lean into stuff that you love.

Any advice for Motion Designers considering getting into the NFT space?

Even if you don’t do it full-time, I’m at a point where I don’t have to be afraid of losing my job and being in a completely terrible situation because I have this art business, and it’s going to evolve and change with the times, but it’s never going to completely go away.

It’s a lane, right? I can do branded work. I can do content or broadcast work. And NFTs are just that next lane. I think that independence and that security that you’re speaking of are super valuable.

If you’re a Motion Designer uncertain about getting involved in the space, Alex Delia wants to know, “What’s stopping you?”